Over the last century, at the forefront flawless design and creativity has been Persol, forging a name for themselves as a designer of impeccable eye wear. We begin by Celebrating 100 Years Of Persol and the anniversary of superb craftsmanship and timeless frames. Th milestone of 100 years offers the opportunity to take a look at the history of a brand which has given us so much.

Celebrating 100 Years Of Persol allows us to take a look at Persol’s ability to incorporate contemporary design with signature details. Distinctive components of Persol frames include a metal pattern hinge, a sign of true artisan design. Another is the keyhole bridge, which can vary in size and style, and only adds to the vintage style. 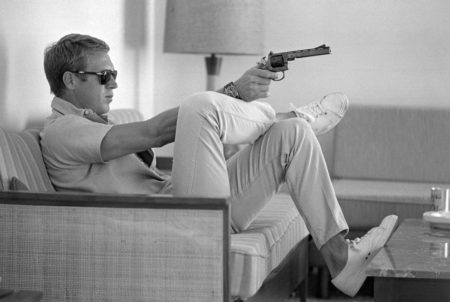 With the help of legendary actor Steve McQueen, another of Persol’s frames that would go on to become one of the most iconic frames of a generation was the PO0714, especially the Special Edition Folding PO0714 frame. This would be feature in Hollywood blockbusters, and gained iconic status, due to McQueen’s King of Cool status.

Persol embraced the Aviator design of . Iconic features of the Persol PO649, really brought forward to bold design of the plastic acetate frame. This design sported all the details Persol would soon become world renowned for. More modern frames draw inspiration from the PO0649. The Persol PO7649, a frame forged from metal, stays true to the original blueprint of the 649 blueprint. The latest edition of the 649 series is the Persol 9469, a frame which goes back to basics, while maintaining the class and signature style.

We use cookies to ensure that we give you the best experience on our website. If you continue to use this site we will assume that you are happy with it.OkPrivacy policy